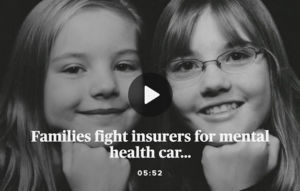 “CBS This Morning” is dedicating most of its broadcast on Wednesday, October 23 to a live special focusing on mental health. Called “Stop the Stigma: A Conversation About Mental Health.” The goal of the special is to help remove the shame and blame from the discussion around mental illness diagnoses. Watch Wednesday, Oct. 23 from 8 a.m. to 9 a.m. ET/PT on CBS.

Every year, an estimated 1 in 5 American adults experiences mental illness. When it comes to insurance coverage, the law is clear. The federal Mental Health Parity legislation passed in 2008 requires health insurers to provide at least equal coverage for mental health conditions, as they do for medical and surgical care. But as CBS News’ Dr. Jon LaPook found out, some families still have to fight to get the life-saving care their loved ones need.

In 2013, Brian Cada’s 15-year-old daughter Nicole took her own life. A year and a half later, his younger attempted suicide. She was 14.

“She was unable to really process the death of her sister. She kept it inside,” Cada said.

Residential treatment was denied. A less intensive level of care was approved.

“The hospital… said what that translates to is your daughter has not failed often enough to get a longer-term treatment center,” Cada said.

After a second suicide attempt, she was approved for residential care. After three weeks there, the clinical staff described “an increase in suicidal ideation,” and that she “clearly” met criteria to continue treatment there.

But just a few days later, the insurer, United Behavioral Health (UBH), part of UnitedHealth Group, wrote: “the services asked for are not medically needed.”

“They were basically protecting their profitability,” Cada said.

Cada could only afford another three weeks.

“It takes time. And because she didn’t have that time, she went back into a withdrawal situation,” Cada said.

Sylvia Tawse has kept a meticulous record of her son’s mental illness and her efforts to get his treatments covered.

“My son was homeless three different times… because he was discharged from the hospital and there was no program for him to go into,” Tawse said, adding, “Nine of 10 times, you’re getting denied the kind of care that you know your loved one requires.”

He has schizoaffective disorder, diagnosed in his teens, and has been hospitalized more than a dozen times. He now works with Tawse and her husband on the family’s organic farm. They have depleted their retirement savings paying for his mental health care.

Tawse played us this 2016 voice mail from a care coordinator discussing how many more days would be covered at a residential care facility. “If his symptoms have worsened—” Tawse stopped the tape.

“‘If his symptoms have worsened’… they’re letting you know the only chance of greater care is if your child’s symptoms get worse,” Tawse said. “And then you end up… where you’re oddly, slightly hoping that something worsens.”

“So, you hear the suggestion that your son get Medicaid from the UnitedHealthcare people?” LaPook asked.

“Why should this be schlepped off to taxpayers?” Tawse said.

“There shouldn’t be the lobbying. It should be: ‘There’s a diagnosis. This requires long-term care,'” she added.

“If you’re the managed care reviewer and I’m the patient or the provider, I could protest all I want and you could always hold up your guideline and say, ‘Look, you just don’t meet these criteria.’ But what if the criteria themselves are just… flagrantly off base?” Bendat said.

Earlier this year, the federal court ruled against UBH and called the guidelines “flawed,” “unreasonable and… more restrictive than generally accepted standards of care” and that financial incentives “infected the guideline development process.”

“There’s thousands of families in our situation and they eventually give up. There’s no more money to fund care,” Tawse said. She said her son is now stable and living with them.

Cada’s daughter left that residential facility in 2017, and now they have very little contact.

“I believe that she blames me for the loss of her sister,” Cada said.

“Where does that leave you?” LaPook asked him.

“It leaves me with the sensation that I have really lost both daughters,” he responded.

UBH told CBS News: “We want our members to have the mental health support they need, when they need it.” The company said it is revising guidelines to be more in line with the way practicing clinicians actually determine the level of care a patient needs.